The National Council for Palliative Care, the lead charity for Dying Matters, has released research today which reveals just 28 of the 83 newly created Health and Wellbeing Boards with public strategies have considered the needs of dying pe...See More

http://www.telegraph.co.uk/health/healthnews/9694529/Needs-of-dying-overlooked-by-health-reforms-claims-charity.html
Posted by nick owen at 09:54 No comments:

Minstead Day of the dead

It has been a most extraordinary time, a Samhein like no other.

It is sometimes said that the festival for the end of the Celtic year ran for 12 or thirteen days and included much feasting after slaughtering animals which could not be kept through the winter.

With KTB http://www.kickingthebucket.co.uk/ starting in mid October and DOTD,  http://www3.hants.gov.uk/msc/msc.html being on Nov 3 the whole thing has been going on for over three weeks.

I only managed to get to a handful of KTB events, and I have still not written them all up.

As I write this afternoon my old and very dear friend Mary Duhig has been cremated near her home in
Cornwall. She died last Monday. Fare well, Mary. You helped me rebuild my life and reach a peak or two. 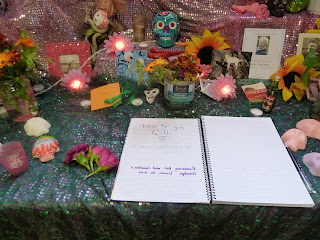 Denise, her friend and carer will have been collecting the ashes.Mary did not want a funeral. I was able to add Mary's name to the book of thoughts and feelings on the altar at the Minstead study centre, where I travelled last Saturday for the Day of the Dead celebrations.

What an event it was; like rolling all the events in the kicking the bucket festival into a single day.

It was also the first chance that I have had to contribute a workshop myself.
I led an hour's session on my book about grief, https://sites.google.com/site/alifeworthcelebrating/ and the writing of poetry as a creative response to the grieving process. Eight people came to the session, which was quite pleasing, but only three wanted to stay to go on a guided meditation and to write something at the end of it. Then we shared the words, symbols and images that had come to us in the course of the experience.

I gave people my card and suggested they might like to send me their writings on line at some point after the day, if they wished to share them. 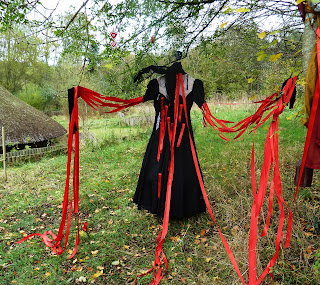 This was a curious installation that greeted me as I walked up the the round house to hear a brilliant story about an old man and his seal woman family in Scotland. I was asked what made me most alive. I thought of my loved ones, living and dead. It was written on one of these red ribbons and pinned on the black dress of death. Then I went on to the round house. 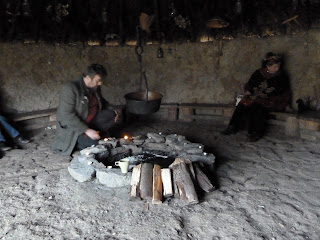 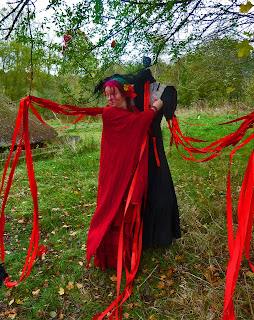 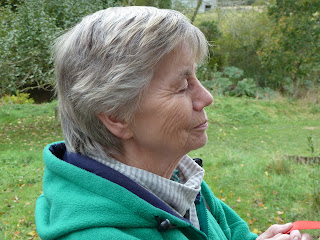 Coming away from the round house I passed again the figure of death with her red mistress. http://janijellybean.blogspot.co.uk/p/my-story.html
Here someone meditates on what makes her most alive. 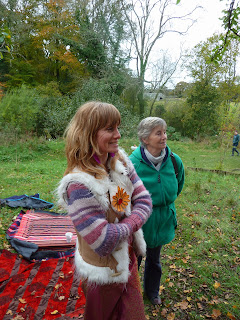 Her daughter, maybe?
http://www.positivelymington.com/index.html  Jude and her mother of the Lymington group. 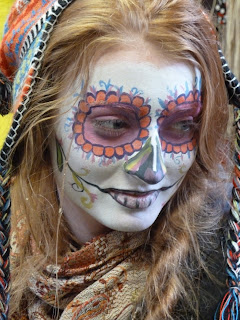 Who is this with the beautiful death mask? I resisted the temptation to have my own face painted. 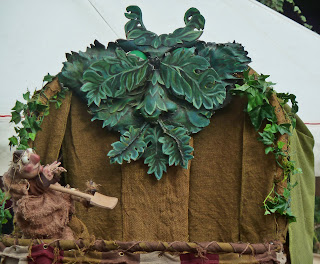 Everyone enjoyed the puppet show under the green man.